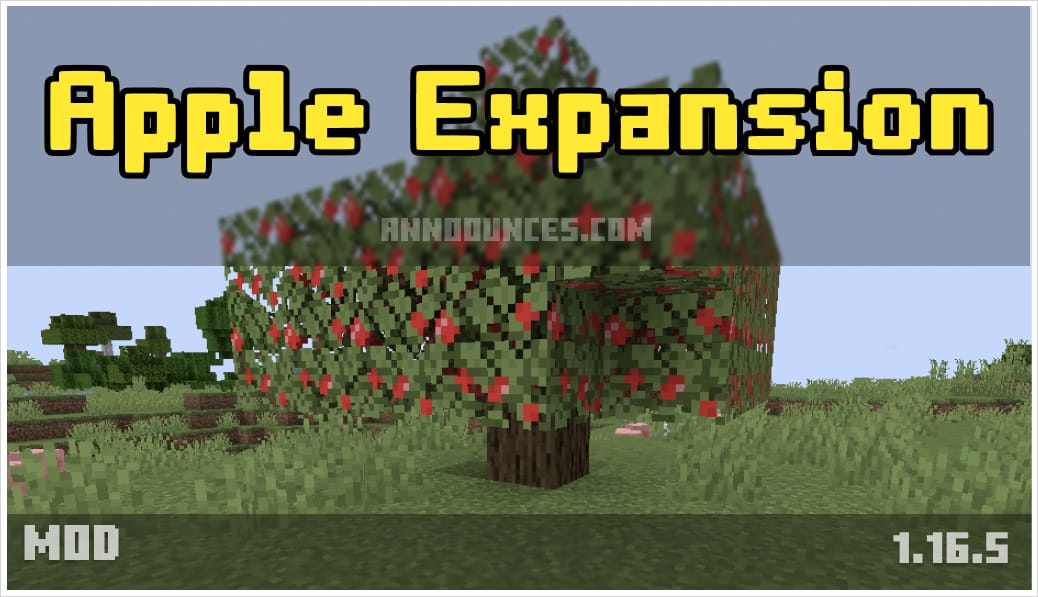 Ah apples… This fruit so iconic in our culture! Who hasn’t spent a summer afternoon at their grandmother’s house nibbling on an apple that she had kindly peeled for you? Who hasn’t succumbed to a nice piece of apple pie from the bakery? Eve herself was tricked in the Bible and ate the forbidden fruit (by the way, it’s not sure if it’s an apple in the Bible, I invite you to read about it). But in Minecraft? Yes, there are apples, it’s true. But they happen to be rather rare, breaking a block of leaves having a one in 200 chance to drop the coveted fruit. So what’s the point? Making golden apples, okay, but then what? Well that’s it, a bit disappointing isn’t it? Faced with this shortcoming, a mod was created to add some features around the favorite fruit of the French. Ladies and gentlemen: Apple Expansion!

A mod created with MCreator that will add an apple tree, a green apple, as well as the ability to create apple juice and caramel. A bonus will be a recipe for crafting an enchanted golden apple.

Surprising but true, the oak tree does not make apples, but acorns! Bravo Mojang for the mistake… That’s why the mod first adds a new type of tree: the apple tree. Its leaves are full of beautiful red fruits that are just waiting to be picked. So be careful, it’s not 100% sure that each block of leaves will give an apple, but you still have more chance than on another tree. Moreover, it is not rare that the apples fall from the tree by themselves. As the saying goes, the apple never falls far from the tree… The apple tree will generate in the plain, like the oak and it is also possible to create an apple shoot by combining an apple and a seedling from any other tree in the workbench.

Let’s talk about the new apples added by the mod. In our orchards, there are no less than 20,000 varieties of this fruit, which makes you dizzy (but be careful not to fall into apples). Here, the mod adds two varieties: the green apple and the orange apple. The apple tree drops the three varieties randomly. In fact, they do not differ from the red apple in Minecraft Vanilla, except that horses do not eat them. Too bad for them, you’ll enjoy the following recipes in their place, it’s good for their apple. By the way, these recipes are available with all varieties without distinction.

Apple juice is a wonder of humanity. It’s sweet, mild, and refreshing. Why not enjoy this divine beverage in Minecraft? It’s quite easy to create one now with Apple Expansion. The apple juice, once consumed, provides a Speed and Saturation effect for a few seconds.

Feeling fancy? You can try to make a poison apple like in Snow White and the Seven Dwarfs! There is a (rather small) percentage of chance that this strange apple will be dropped by an apple tree, so you can create it yourself with a spider’s eye. It will also give you a Poison and Nausea effect. And yes, this apple will make you see some green and unripe…