Minecraft Forge is an API created in July 2011 by Spacetoad, and allows users to easily install many mods on Minecraft while avoiding incompatibilities as much as possible. It also provides modders with many features to deeply modify Minecraft.

Some mods directly modified the Minecraft code: they are called “vanilla mods” (they still exist, not to be confused with no mods using command blocks) their main disadvantage is that they are very rarely compatible with each other.

Modloader thus allowed to install several mods at the same time without too many compatibility problems. However, for Buildcraft version 2.0, Spacetoad wanted to add a new liquid in the mod: oil.

For this feature to be implemented, Spacetoad had no choice: it had to directly modify the Minecraft bucket code (in the Minecraft bucket code, there’s a function that if you right-click on it and point to water, then the water is removed and the empty bucket is replaced by a bucket of water, same for lava. This is where Spacetoad should have added a code that does the same thing with oil).

So he was faced with the following problem: if another mod adds fluid in the same way, the last installed mod will cancel the modifications of the other one, or even worse it will crash the game. So they won’t be compatible.

Thanks to Forge, mods have been able to add more and more complex features to the game without being incompatible with each other. Pretty soon Eloraam (creator of the redpower mod, the old ones surely know this mod) joined the project and added a lot of necessary functionality for his red power mod.

Afterward, Spacetoad didn’t have time to take care of the project anymore and so gave hand to LexManos. LexManos was later joined by cpw who created FML (Forge Mod Loader) to replace Modloader and ModloaderMP with a more modern solution.

Indeed until the beginning of version 1.2.5, Forge was always dependent on Modloader and ModloaderMP. So there were several things to install, it was not as simple as now. Forge is just a huge library of functions for modders but didn’t load mods.

The latest versions of Forge 1.2.5 were no longer dependent on Modloader & ModloaderMP but on FML which was integrated directly into Forge. Recently (last year), Forge and FML have been merged into a single project. However, we can still see in the mods menu that there are two distinct parts. From the mods menu of Forge, you can also see a mod named MCP. It’s not really a mod but the tool used to create mods.

Thanks to these different evolutions, Forge is now very easy to install since you just have to run its automatic installer. At the time it was necessary to open the jar of Minecraft with an extraction software and replace some Minecraft files by Modloader files, then by those of ModloaderMP then finally by those of Forge… A complex installation that took time.

Over time Forge has become more and more complete. The project being open source, any modder can propose a new feature. Here are some features of Forge useful for the user:

Find in the tab below the changelog of the last stable version of Forge for 1.15.2. We advise you to install the 1.15 mods with this version to avoid compatibility problems as much as possible.

Once you have downloaded the version of Forge you want from the table above, you will get an executable file. 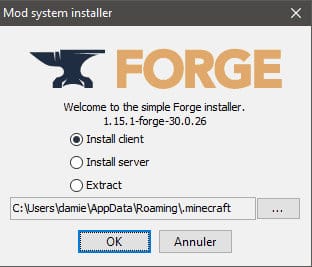